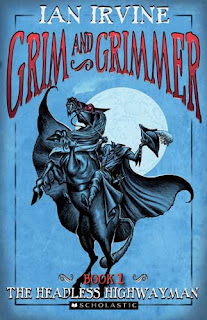 What gave you the idea to write  the Grim and Grimmer series?
I wanted to write something different from the kinds of books I’ve been writing in the past. This time I wanted to write books that were great adventures, with terrific characters, but I also wanted them to be funny. And that was hard, because I’ve never written humorous books before.
And it was a bit frightening too. What if I wrote the first book and it wasn’t funny? That would be really embarrassing. 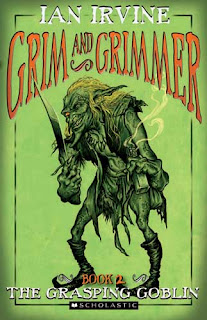 What sort of things inspire you?

Everything inspires me. I’m interested in the whole world and everything in it. I love learning about new things. The thought of strange lands that I know nothing about inspires me, and the unusual customs of the people who live there, and the amazing animals and plants. But most of all, I’m inspired by the incredible things that ordinary people can do when they’re put into dangerous situations that they have to get themselves out of by their own courage and strength, their cleverness and daring.
I love writing stories about people like that. People who aren’t natural heroes.
Have you liked books since you were young and what sort of books did you read? 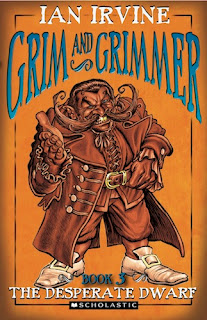 My Mum taught me to read when I was four, before I went to school, and I’ve loved books ever since. When I was in lower primary school (a very long time ago) I read most of the books in the school library. After that I read everything I could get my hands on. Books for boys and books for girls, adventure stories, romance, crime stories and stories about war and space exploration, voyages to the bottom of the sea, stories about heroes and pirates. Plus all kinds of non-fiction books about machines and secret codes, and history and mythology, everything!
I’m still interested in just about everything. I think, to be the best writer, one has to be always reading and learning new things. You never know where your next idea is going to come from.
I think the “Headless Highwayman” is a sad story. Why did you write a sad story? 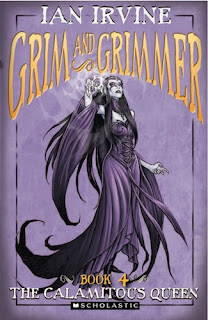 I don’t think of this book as a sad story. I think it’s inspirational, because Ike starts out as a boy with nothing: no friends and no family. He’s bottom of the class, useless at sport and no good at anything. “Useless Ike” they call him, and he certainly makes a lot of dumb mistakes. He’s reckless and never things before he acts. He gets into awful trouble and suffers a lot, but by the end of the story he’s made a wonderful friend, Mellie and he’s had terrific adventures,. Ike has discovered great courage in himself, and perseverance, and also realised that he’s good at some things he’s never expected. And he’s rescued the princess. He’s a real hero.
By the end of the book Ike still has a long way to go, but he’s greatly changed and deserves all the success he’s got. And I think that’s inspiring.
I’ve loved writing the Grim and Grimmer books, especially the last one, The Calamitous Queen, which has just been published. You can read the first chapters on my website:
http://www.ian-irvine.com/calamitousqueen_ch1.html.
I'd love to hear about any more questions you have.
Ian
Posted by Ian Irvine at 4:20 PM No comments:

Over the next few weeks I'm blog touring for The Calamitous Queen, the fourth and final book of my humorous fantasy series for younger readers (and older ones still young at heart), Grim and Grimmer. It's published by Scholastic Australia, http://www.scholastic.com.au/ and http://onyabus.blogspot.com/ and you can read the first chapters here, http://www.ian-irvine.com/calamitousqueen_ch1.html 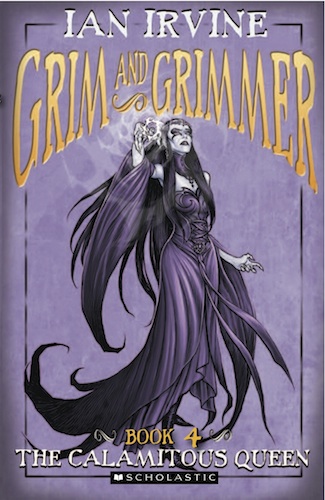 Emajicka is marching on Grimmery with an army of a million Fey. Can things possibly get worse?

Yes, they can, for Ike is all alone. Mellie has gone, attempting to pull off the perfect crime. Lord Monty is at war with his reattached head. The beautiful sprite Mothooliel wants to steal Ike’s eyeballs, and Grogire the firewyrm plans to kill him in the most disgusting way.

Can Pook and Ike free the Collected children? Will Ike discover the secret of the Gate Guardians and clear his parents’ names in time to save Grimmery? Or will Spleen and Nuckl finally feast on Ike’s innards?

Brace yourselves for a wild ride.


For blurbs, covers and first chapters for the series, see http://www.ian-irvine.com/grimgrimmer.html

Posted by Ian Irvine at 3:42 AM No comments:

I'm looking forward to blogging with Ian!
Netball
Posted by netball at 5:40 PM No comments:

Ian, we have some questions about writing in general and just about being an author. These are some of them:

Year 6 at OLOL are thrilled to be part of Ian Irvine's Blog Tour. We have been reading The Desperate Dwarf and have so many questions!
Posted by TL Tarro at 6:48 PM 1 comment: